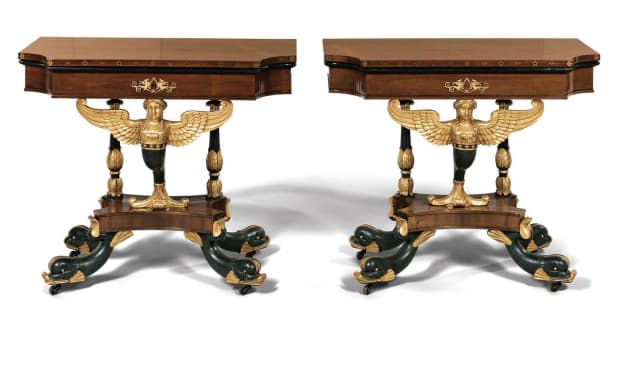 Skinner’s sale features highlights from a lifetime collection, including important 18th and early 19th century pieces and paintings from the China Trade.

MARLBOROUGH, MA – A lifetime Americana collection featuring significant works of handcrafted furniture and art will be hosted by Skinner Auctioneers on Friday, November 19.

The sale consists of the extraordinary Beacon Hill Collection of John and Marilyn Keane, devoted collectors of early American craftsmanship and committed philanthropists well-known to the Boston arts community.

Eminent benefactors of the Museum of Fine Arts, Boston, where the American Wing’s Newport Furniture Gallery was named in their honor, the Keane’s collection is evidence of an innate understanding of early American decorative arts, as well as the work’s historical impact in relation to the young nation’s burgeoning identity and status.

The Beacon Hill Collection includes 101 lots of significant works of handcrafted furniture from the colonial period and decorative movements directly following American independence. Exemplary of the collection are a pair of classical card tables attributed to the shop of Charles-Honoré Lannuier, the renowned New York cabinetmaker whose decorative style epitomized the American Empire period. The card tables are estimated at $100,000-$150,000. Lannuier’s furniture, which is featured in the collections of the Museum of Fine Arts, Boston, the Metropolitan Museum of Art, and the White House, speaks to the profound aesthetic and political influence of Neoclassicism on the early American spirit. The tables feature a rosewood veneer, brass star-inlaid edges, carved and gilt caryatid supports, and dolphin feet.

Other highlights include two important pieces of Eastern Massachusetts blockfront furniture: A Boston chest of drawers carved in small and elegant proportion, with finely sculpted claw-and-ball feet, estimated at $50,000-$75,000, and an impressive secretary bookcase with a history in the family home of Congressman Hezekiah Bradley Smith, estimated at $75,000-$100,000.

Several notable works from the sale highlight the rich contributions to colonial American furniture by renowned Philadelphia and Rhode Island cabinetmakers, the former of which includes a carved pair of dining chairs, estimated at $15,000-$25,000, an easy chair, and a rare marble slab table, estimated at $100,000-$150,000. The slab table, crafted circa 1760, with carving attributed to renowned Philadelphia carvers Nicholas Bernard and Martin Jugiez, features a boldly carved gadrooned skirt, carved knees, claw-and-ball feet, and has an impressive multicolor original marble top.

An upholstered open armchair from Rhode Island, estimated at $50,000-$100,000, is exemplary of the generous proportions and lavish design distinctive to that region in the late 1760s. The chair is distinguished by its shaped and carved arms with boldly scrolling handholds, and shell- and bellflower-carved cabriole legs ending in claw-and-ball feet.

Characteristic of the high standards of the Keane collection are China Trade paintings of rare and exceptional quality, including two remarkable portraits. An outstanding example of a Hong merchant is attributed to Spoilum, the Chinese artist often recognized as the earliest oil painter of the newly accessible Canton region. A historical scene depicting the reception of an Imperial Army, similarly attributed to Spoilum or a follower, was a relevant work discussed in Carl Crossman’s indispensable art historical guide, The Decorative Arts of the China Trade.

The collection also includes fine examples of port views of the Hongs at Canton and the Hong Kong waterfront, as well as more uncommon depictions of the Bund at Shanghai and Singapore from the Roads.

The auction starts at 10 a.m. Eastern. For more information and to see more lots, visit Skinner.

Her Brush: Japanese Women Artists From The Fong-Johnstone Collection News